Q From Adi Piltz: I wish to know the origin of the word turnpike. A friend told me a story about a farmer laying turning spikes in his field to mark his territory. Is it true?

A There’s just a grain of truth in it. 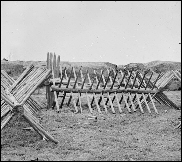 Cheval de frises in use during
the American Civil War.

The original turnpikes — dating from the fifteenth century — were indeed spiked barriers, but they were designed to be placed across roads to prevent sudden attack by men on horseback. Later ones were horizontal timbers fitted with spikes, a version of what is called a cheval de frise, but the Oxford English Dictionary suggests that the mounting timbers of the originals may have been vertical, since a slightly later sense was of a horizontal cross of timbers turning on a vertical pin, set up to exclude horse-traffic from a footpath, which is in essence the device we now call a turnstile.

The word itself doesn’t come from turning spikes, but from turn and pike, the latter in the old sense of an infantry weapon with a pointed steel or iron head on a long wooden shaft. It’s the inclusion of turn here that suggests the pikes were the barrier, which could be turned aside about a vertical pivot to allow access.

From the middle of the seventeenth century onwards, many new toll roads were created in various parts of Britain through acts of Parliament. They were run by trusts, the tolls supposedly being put towards the cost of maintenance. Early toll gates were modelled on the old turnpike barriers and so the roads became known as turnpike roads, later shortened to just turnpikes.