Q From Gloria Spielman: What is the origin of the expression to read someone the riot act?

A These days, it’s just a figurative expression meaning to give an individual or a group a severe scolding or caution, or to announce that some unruly behaviour must cease. But originally it was a deadly serious injunction to a rioting crowd to disperse.

The Riot Act — full title An act for preventing tumults and riotous assemblies, and for the more speedy and effectual punishing the rioters — was hastily passed by the British government in July 1715 and came into force the following month. This was the period of the Catholic Jacobite riots, when mobs opposed to the new king, the Hanoverian George I, were attacking the meeting houses of dissenting groups. There was a very real threat of invasion by supporters of the deposed Stuart kings — as actually happened that year and also in 1745. 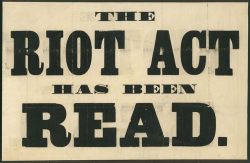 Posters such as this were displayed to tell people that the Riot Act had been officially invoked.

The government feared uprisings, and passed a draconian law making it a felony if a group of more than twelve persons refused to disperse more than an hour after magistrates had told them to do so. To invoke the law, the magistrates had to read the proclamation contained in the Act aloud to the mob, something that often required more courage than they could summon up:

Our sovereign Lord the King chargeth and commandeth all persons, being assembled, immediately to disperse themselves, and peaceably to depart to their habitations, or to their lawful business, upon the pains contained in the act made in the first year of King George, for preventing tumults and riotous assemblies. God save the King.

The pains or penalties were penal servitude for life or not less than three years, or imprisonment with or without hard labour for up to two years. The Act remained in force for a surprisingly long time, only finally being repealed in 1973, though it had been effectively defunct for decades.