Q From Mark Raymond in Australia: What are the origins of the word jinx? It seems such a strange word.

A It does look odd. At one time, dictionary makers thought they knew where it came from. However, research by two American lexicographers in the past decade has refuted the traditional view and provided us with its true origin. Explaining the background is going to need a moment, since along the way we must take in the Ancient Greeks, the study of birds, witchcraft, nineteenth century vaudeville and the history of baseball.

First, the firm facts. The word jinx, in the sense of a thing or person that brings bad luck, is first recorded as sports slang from the US in the early years of the twentieth century. Most of the early American citations relate to baseball and are spelt jinks:

Any one who can furnish reliable information leading to the conviction of the miscreant who put a “jinks” on the Los Angeles baseball club’s batting eyes last spring will likely receive a free pass for the rest of the season by advising Manager Morley.

By the end of the decade the spelling had moved to the modern one. In this form it appeared in The Jinx: Stories of the Diamond by Allen Sangree of 1910 and Christy Mathewson’s Pitching at a Pinch of 1912, in which he writes, “A jinx is something which brings bad luck to a ball player”. From sports it spread out into standard American English and later to other varieties of the language. 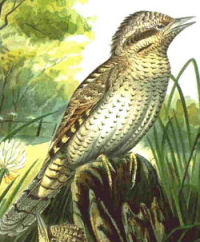 Most dictionaries say with varying degrees of conviction that the word derives from the classical Greek word iunx for the bird that we in Britain call the wryneck. It’s a member of the woodpecker family, a species that breeds across Europe and Asia. It has a strange habit of twisting its neck right round when it’s alarmed or when it’s watchfully at rest, hence its English name; it has an odd courtship ritual, in which the male and female perch opposite one another, shaking their heads about, and gaping their mouths to show the pink inside. Such curious behaviour made people think that the wryneck was uncanny, and from the time of the Greeks there were superstitions attached to it, with links to witchcraft, divination and magic. Its Greek name passed into Latin and then English, either as yunx or jynx.

So it’s not surprising that dictionary writers often suggest that jinx comes from this bird of superstition. But there are two big holes in the idea: the wryneck is not a North American bird and the word jynx for it was scholarly and uncommon. Appropriate though it was, it would be surprising to learn American sportsmen seized upon it. 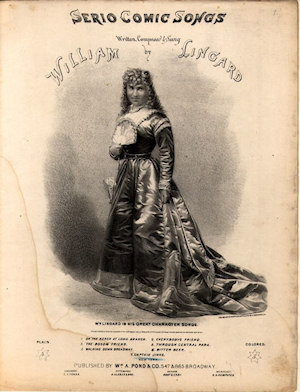 The cover of sheet music by William Lingard, which includes Captain Jinks.

A more plausible suggestion was put forward by Barry Popik, who linked it with a once well-known American vaudeville song, Captain Jinks of the Horse Marines. Captain Jinks was an incompetent buffoon and unsuccessful soldier, who eventually was drummed out of the Army:

Captain Jinks of the Horse Marines, by William Lingard, 1868. Note that the horse marines were a mythical body of men, not least because horses on board ship were spectacularly useless. In fact, it was a deeply deprecatory term on board ship for a landlubber or bungler. Herman Melville wrote in his book White-jacket; or, The World in a Man-of-War of 1850, “To call a man a ‘horse-marine’ is, among seamen, one of the greatest terms of contempt.”

This song became all the rage, almost at once spawning another song by Will Hays about the captain’s supposed wife: Mistress Jinks of Madison Square. It grew to be a well-liked square dance tune, and a popular song in the American Army in the decades after 1870. In 1901, the young Ethel Barrymore starred at the Garrick Theatre in New York in Clyde Fitch’s melodrama of the 1870s which he called Captain Jinks of the Horse Marines; in 1902 Ernest Crosby, a friend of Mark Twain, wrote a satirical anti-imperialist novel about the Spanish-American War with the title Captain Jinks, Hero. So, thirty years after the song originally appeared, it was still sufficiently well known that a playwright and author of the early 1900s could separately refer to it in titles in the expectation that their audiences would understand them. However, it isn't the direct origin of jinx. 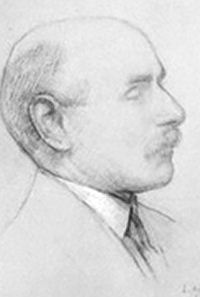 Thomas Anstey Guthrie (F Anstey),
who unwittingly started us down the road to jinx

The most probable source was uncovered by Douglas Wilson. In 1887, Archibald Clavering Gunter, Fred Maeder, Robert Fraser and Howard P Taylor wrote a fantastic musical comedy, Little Puck, based in part on Vice Versa by the British novelist F Anstey (pen name of Thomas Anstey Guthrie), which had been published five years earlier. The book involves the magical swapping of bodies between a prosperous businessman and his schoolboy son (if this sounds familiar, it’s probably because of the 1948 Peter Ustinov film based on the book and with the same title that starred Roger Livesy and the young Anthony Newley or its 1988 remake starring Judge Reinhold and Fred Savage). In writing Little Puck, the authors took many liberties with the book, amalgamating its plot with that of a later Anstey work, A Fallen Idol, and introducing additional characters, in particular one to whom they gave the name Jinks Hoodoo, described as “a curse to everybody, including himself”. Hoodoo, a variation of voodoo, is recorded from the early 1880s in the sense of a person or thing that’s supposed to bring bad luck. At this time, Jinks — not an uncommon first name, nickname or family name — didn’t have such associations. Little Puck was first seen in Buffalo in September 1887 and later transferred to Brooklyn in 1888 and Broadway in 1890.

The character’s name was picked up surprisingly early (even if spelled wrongly) as a way to describe a person who brings bad luck:

If Halstead was the Jinks Hoodo, and if he was at the disposal of the republicans, we cant see why they should send him to the most important political ground in the Union.

Decatur Morning Review (Illinois), 1 May 1890. Murat Halstead was a famous journalist of the time.

and it became fairly common from the middle of that decade on:

But a whole page of Herald and Tribune notices combined could not have rescued the affair from the failure to which it was foredoomed when its management was entrusted to the hands of a “manager” who combined in so eminent a degree the qualities of a Jonah and a Jinks Hoodoo.

By early in the following decade it had become a baseball term:

His accident was the climax of a string of hard luck, outpitching his opponents and then losing games by one run day after day and other “Mr. Jinks Hoodoo” stunts.

It seems very likely that these two fictional characters came together in the public mind — Captain Jinks, the well-known buffoon, and Jinks Hoodoo, who really was a jinx. The influence of the former probably helped the elision of the latter’s name to just Jinks. The respelling came later, for no very obvious reason.