Q From Victoria Stefani: On the HBO series Deadwood, Ian McShane’s foul-mouthed character Al Swearengen often refers to people he doesn’t respect as hoopleheads. Clearly it’s not a compliment, but is there a more precise definition and origin of the term?

A Like many people in the UK, I’ve been following this series with interest and am looking forward to the second season. This usage by the Al Swearengen character intrigued me, too, but my habitual indolence is so great that it was your question that provoked me to look it up.

Hooplehead is not a common American slang term (most of the examples online have been taken from the series, which has probably given it more exposure than it has ever had before). It refers to a foolish, ridiculous or worthless person. Swearengen uses it as an all-purpose dismissive insult, which is pretty much how it seems to be used in real life.

There is a real place called Hoople, in North Dakota, spiritually not too far removed from the real Deadwood in South Dakota, though the two places are at opposite corners of the states. Hoople, however, is a tiny place even today (population about 300) and can hardly have been significant enough in 1876 — even if it existed then — to be the source of a deprecatory comment. (If you’ve heard of it, it’s because it’s the location of the fictional University of Southern North Dakota, which includes on its staff “Professor” Peter Schickele, the greatest world expert on that extraordinary musician PDQ Bach.) 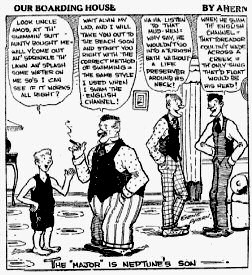 An early appearance of Major Hoople in Gene Ahern’s comic strip Our Boarding House, on 5 July 1922, in which the major is trying to convince his nephew that he once swam the English channel.

According to Professor Jonathan Lighter’s Historical Dictionary of American Slang, it probably derives from Major Hoople, who was a character in a once-famous cartoon strip entitled Our Boarding House, which featured the goings-on at Martha Hoople’s rooming establishment. It was written and drawn by Gene Ahern and began to appear in September 1921, though Martha’s husband, Major Amos Barnaby Hoople, doesn’t appear from ten years’ away globetrotting until 27 January 1922. The Major was a layabout given to whopping lies about his achievements and addicted to get-rich-quick schemes. One writer has described him as “perhaps the greatest windbag, stuffed shirt and blowhard ever to ‘hrumph’ his way across the funnies page”. Hoople as a derogatory term is recorded from the late 1920s and remained common for decades because the strip continued until 1981. Professor Lighter’s first, and only, recording of hooplehead in the Historical Dictionary of American Slang is dated 1994 (though he has recently found one from 1980 in Dennis Smith’s Glitter and Ash: “The old man said, ‘Speakin’ of Maureen, you know she’s been acting like a real hooplehead lately, like a kid they let out of Creedmoor by mistake.” [Creedmoor is a psychiatric centre in Queens, NY.])

It would not have been possible for Al Swearengen to have used the word in 1876, 40+ years before Gene Ahern invented the character and a hundred years before it was first recorded in print. The producer and head of the scriptwriting team, David Milch, has been reported as saying in essence that he picked something out of the air to serve as a suitable insult without great concern for its etymology. It seems he must have heard it somewhere and it came conveniently back to mind while writing the scripts. It’s definitely an anachronism.