Q From Teri Peterson: My father is looking for the origin of the phrase goody two shoes.

A It comes from the title of a twee nursery tale called The History of Little Goody Two-Shoes, which was published in 1765 by John Newbery, one of the earliest London publishers of children’s stories.

It recounts the affecting and morally impeccable story of Little Margery Meanwell, whose father was ruined by a couple of villains out of pantomime named Graspall and Gripe. Her parents died, leaving her and her brother alone in the world. Little Margery had only one shoe, but through the help of a rich relative of Mr Smith, the local clergyman, she obtained a new pair of shoes: “She ran out to Mrs. Smith as soon as they were put on, and, stroking down her ragged apron, cried out, ‘Two shoes, mamma, see, two shoes!’ And she so behaved to all the people she met, and by that means obtained the name of Goody Two-Shoes.” Eventually she became rich and educated through her virtue and hard work. 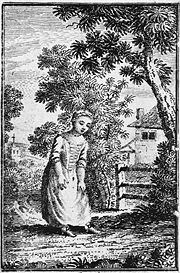 Goody Two Shoes, from the 1768 edition of the book

The story became famous and has been reprinted more times than anybody can count. But it was only in the 1930s that the expression goody two shoes came to mean, not the heroine of the story, but a person who was smugly or obtrusively virtuous, a goody-goody.

This came about through a misunderstanding of Little Margery's name. She was indeed good, but she was called goody because it was a polite term of address at the time at which the story was written. It was an abbreviation of goodwife, the female head of a household, the distaff equivalent of goodman. The title goody was usually applied to a poor married woman. The shift of goody to our modern sense was helped by the creation of goody-goody in the 1870s. This was based on another sense of goody, from the early nineteenth century, for somebody whom the Oxford English Dictionary describes as “characterised by inept manifestations of good or pious sentiment.”

As an etymological aside, the anonymous author of the original story — it has been attributed most often to Oliver Goldsmith, though Charles Lamb and Newbery himself have also been suggested — may not have invented the expression. A correspondent to Notes and Queries in 1904 pointed out that goody two shoes appears in a burlesque poem by Charles Cotton, A Voyage to Ireland, of 1694, as a cant term for a bad-tempered housewife: “Why, what then, Goody two-shoes, what if it be? / Hold you, if you can, your tittle-tattle, quoth he.” This may be just a coincidence, because no other examples are known in the century in between.