Q From Andy Bell, Hong Kong: I would love to have your thoughts on crap, the word crap, that is, and its connections with Thomas Crapper.

A You quoted a text from a Web site in your question — too long to reproduce — which seeks to link crap, for defecation, and crapper, for the place where one does it, with the late Mr Thomas Crapper, plumber. Though he achieved a great deal in his lifetime, Mr Crapper was neither the inventor of the flush toilet (as some have said), nor is there any evidence his name is connected with these words other than by an odd coincidence.

Crap is actually Middle English. It seems to be a mixture of two older words — one thread comes from Dutch krappen, to pluck off, cut off, or separate; the other may be from Old French crappe, siftings or waste or rejected matter, from medieval Latin crappa, chaff.

The first sense in English was indeed “chaff”, and was also used in some places as the name for weeds that infested cereal crops, such as darnel, rye-grass, or charlock. Later (we’re talking about the end of the fifteenth century here) it took on an extra meaning of the waste residue that was left after rendering fat.

What seems to have happened is that croppin ken changed to crapping ken around the middle of the nineteenth century under the influence of the idea of crap as smelly rubbish, and crap, noun and verb, later came from crapping by a process called back-formation. Crapper is American slang, which dates from the 1920s, and is an obvious enough extension of the older noun and verb. The common story that American servicemen stationed in London in the First World War saw Mr Crapper’s name on sanitary ware and borrowed it is unsupported by any facts, though it doesn’t seem altogether implausible. 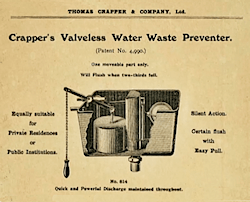 As Thomas Crapper didn’t start his business until 1861, and didn’t become well known until much later, it’s clear his name had no influence on the development of the word crap. A lot of the confusion about Crapper the man is due to a tongue-in-cheek book of 1969 by Wallace Reyburn, Flushed with Pride: The Story of Thomas Crapper, which told a lot of falsehoods about him, and even led some people to conclude that he had never existed.

He was, however, a successful businessman and salesman, and sold great numbers of items of sanitary ware from his base in Chelsea, London. Examples of his work with his name on them may still be seen even now, for example on the occasional manhole cover or in an old public toilet.